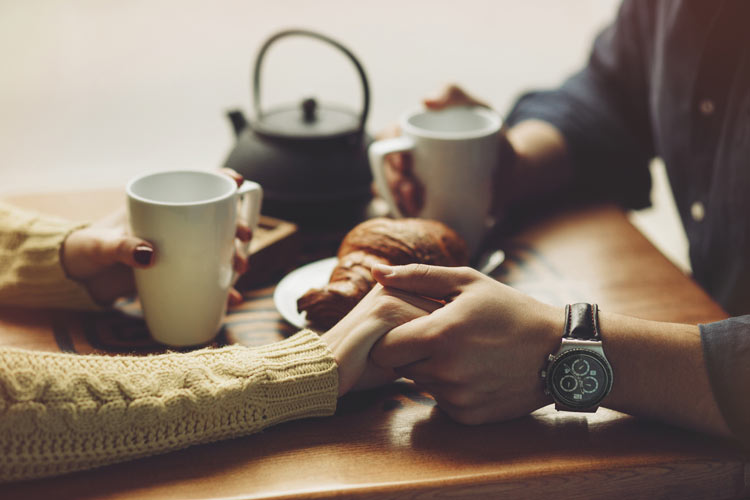 Energy is the essence of life. When we lack energy, we are unmotivated, depressed, impatient, lack a sense of direction, and above all, feel as if there is an empty void in our stomach that can never be filled.

Nobody enjoys a lack of energy. Quite frankly, it sucks (literally as you will come to find out).

When our energy feels low, the subconscious mind seeks to replenish our energy stores. Unfortunately, most people unknowingly get their energy by stealing or literally sucking it out of other people.


This Is What I Call Energy Theft

The people who steal energy are vampires. Except in this case, people suck energy and not blood.

Energy theft can be achieved with several different strategies. Usually the strategy you use is the same strategy that worked during your childhood.

Energy theft is harmful because it:

An Example of Energy Vampirism

Before we dive into the types of energy vampires, I am going to give you an all too familiar example. Put yourself in this situation:

As I stroll into the break room to eat my delicious quinoa salad for lunch, I notice only one person is in the room sitting at a table with his head buried in his palms. After getting a glimpse of his face, I realize it is my friend Sam. He is clearly ‘down in the dumps.’

“Something must be wrong, I can clearly see it” I said reassuringly.

“I guess…but never mind, it doesn’t matter” said Sam in a quiet voice as he slightly turned away from me.

“Well something is obviously wrong, but it looks like you don’t want to talk right now…so that’s perfectly ok.” I said as I began to walk out of the room. As I approached the door, Sam lets out an even louder SIGH to bait my attention. It worked.

“I guess something is wrong.” said Sam reluctantly.

“What’s wrong then?” I asked with an irritated tone.

“It is too much to explain, you won’t understand anyways” said Sam as he made brief eye contact, then gazed downwards and buried his head back down into his palms.

“Just try to explain,” I said caringly. “It’s worth a try, to get it off your chest.”

“Well…ok…maybe,” said Sam with a painstaking delay between each word. “It is just, I am having trouble with many things. I am emotionally stressed because of everything that is going on in my life.”

This dialogue is just as irritable to read as it is to experience.

I would bet that you have experienced something similar to this, whether it was with a significant other or someone else you are acquainted.

Don’t these situations leave you feeling drained, guilty, tired, irritated, or all of the above? You are certainly not the only one.

In fact, chances are, you have been like Sam at some point in your life, and perhaps often. But nobody likes this aloof behavior because it is draining to be around.

Why is it draining? Well, behaviors like Sam’s are actually draining the energy out of you. Similarly, I would bet that you are using Sam’s strategy, or possibly another form of energy theft, to replenish the energy that people have stolen from you.

If Sam would have told me exactly what was bothering him, a solution to his sorrows could have been discussed…but he did not want a solution. Sam wanted an energy fix. He needed to replenish the energy that has been stolen from him.

You All Are Energy Sucking Vampires

Unless you are a spiritual savant and are able to control your ego, you’re contributing to conflict in our world by stealing energy from others on a frequent basis.

Yes this may be difficult to swallow, and it was for me at first too. But I am saying this out of love, not out of malice. Sometimes the blunt truth is the most effective tool to get the job done.

It is essential for you to become aware of your energy sucking behaviors because these behaviors feed the ego, the root of all conflict.

When you seek attention, you seek to steal the energy from those who are giving you the attention or a feeling of superiority.

Think back to when someone you know acted like Sam.

How did you feel after the interaction? It is likely that you felt drained, tired, and possibly guilty afterwards.

Next time a Sam pops up in your life, take careful note of how it makes you feel.

Also, be aware if you ever act like Sam in the future. Become aware how you feel after acting like Sam. Most likely, you will feel “better,” empowered, energized, and/or have a feeling of satisfaction. That void in your stomach has been momentarily filled.

Read back on the dialogue and pay attention to how Sam kept vying for my attention (energy).

Even though Sam was unaware of what he was doing, he was trying to keep my attention by acting aloof and giving vague responses. This behavior enticed me to ask questions and find out more. He had me just where he wanted; Sam was keeping my attention solely on him. In doing so, he was stealing my energy. When he began to lose my attention, he would try to hook me back in with obvious cues which indicated he was unhappy.

The longer he could sustain my attempts to figure out what was wrong, the more energy he could leech from me.

This form of energy vampirism is called the aloof strategy. Aloof is but one of the 5 different ways people, or energy vampires, steal energy from other beings.

Those of you who have read the Celestine Prophecy book series (which is an absolutely amazing series of books for spiritual development, might I add) will know that these energy vampirism strategies are called control dramas.

The 5 Types of Energy Theft

1.) The intimidator is exactly how it sounds. These people take energy from others through intimidation and threats. This is the most aggressive form of energy vampirism and is used in a variety of ways. 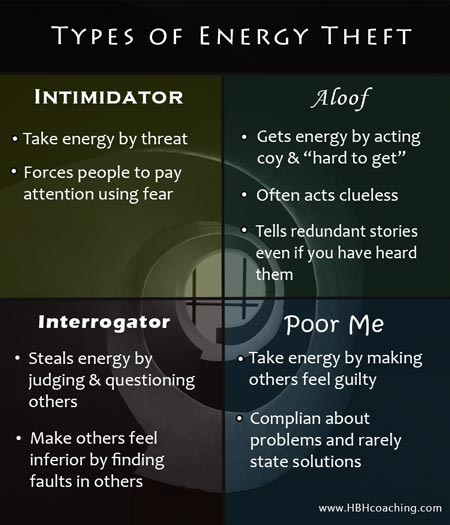 2.) Interrogators constantly judge other people. They are always looking for something in someone else to criticize. By doing so, they get a sense of ego, or superiority.

3.) Ohhh, and the infamous poor me control drama. Most of you reading this can relate to how guilt just sucks the life force right out of you. It’s a downright awful feeling. People who use poor me often,

4. The aloof style of energy theft is perhaps one of the most common, yet the most overlooked. These people are quite often very passive aggressive. They are experts of the “oh… nothing’s wrong,” when something clearly is bothering them.

5.) Storytellers love to tell a story at any opportunity they can get in social situations. This is how they get their energy and attention.

People can also be what I call an adapter. These individuals are energy sucking vampire lords.

Adapters will use every control drama. Through life experiences, they subconsciously know how and when to use each energy theft strategy for every situation in their life. This allows them to steal the most possible energy.

I honestly do not have many suggestions for these individuals. Their ego is usually so deeply rooted into their identity that it would take an ENORMOUS amount of work to reverse. Most of the time they are stubbornly entrenched in denial, so getting through to them would be quite a feat or trigger the defensive use of a control drama such as the intimidator.

Adapters are unwavering slaves to their ego. Deep down, adapters are very insecure. They feel the need to constantly steal energy and give themselves the false impression that they are superior. Unlike the other strategies, adapters constantly look for opportunities to steal energy. These efforts increase as their energy drains.

Be careful not to become an interrogator yourself when observing these control dramas in others. The biggest challenge is to recognize these behaviors within yourself so they can be vanquished.

By eliminating your energy stealing behaviors, you will be one step closer to taking control of your life rather than your ego controlling it.

How to Stop Stealing Energy From Others

If you learn anything from this post, I urge you to at least take this section to heart.

When you stop taking energy from others, something amazing happens: social interactions become genuine and more enjoyable, you develop a magnetic personality, you experience less conflict, and people seem to trust you.

“Ego is a castle built not of stone, but of insecurity. Locked away within its dark dungeons, you will find only one prisoner: your true self. “

When people realize that you are not there to criticize, intimidate, make them feel guilty, or just steal their energy, they open up the gates to their castle built by their ego. Inside this castle, is their true self. People will subconsciously realize that they will not have to have to protect or battle over energy. As a result, they let their guard down.

When you abandon your energy sucking ways of life, you will begin to realize that people act “different” around you. Except this “difference” is not different at all; it is their true self.

More times than I can count, people tell me up front that they feel as if they can act like themselves when they are around me. Weird right? Not so much. They just feel secure and when that happens, their ego has no place.

Here are some suggestions on how to leave your life of energy thievery behind:

Be brutally honest with yourself and determine which energy sucking strategy you use the most—an awareness is the first step to removing it. While people can use a combination of different strategies, most primarily use one.

All This Talk About Ego…How Does it Relate?

You may already be aware or have connected the dots, but when you steal energy from others, you are feeding your ego. This ego is a false and superficial identity.

Ego prevents you from free will and being your true self.

The more you fuel that ego, the further you get from your true self and the less inner freedom you have.

The ego always wants more energy; it is never enough. As a result, many of your interactions with human beings are controlled by this ego.

The ego is the driving force behind all attempts of energy theft. It wants to prevail and maintain control.

But what would happen if we were stripped of our ego and energy-stealing behaviors?

That is a profoundly deep question…

What would happen if there was no ego in our world? Would that mark the end of all conflict, exploitation, and violence?